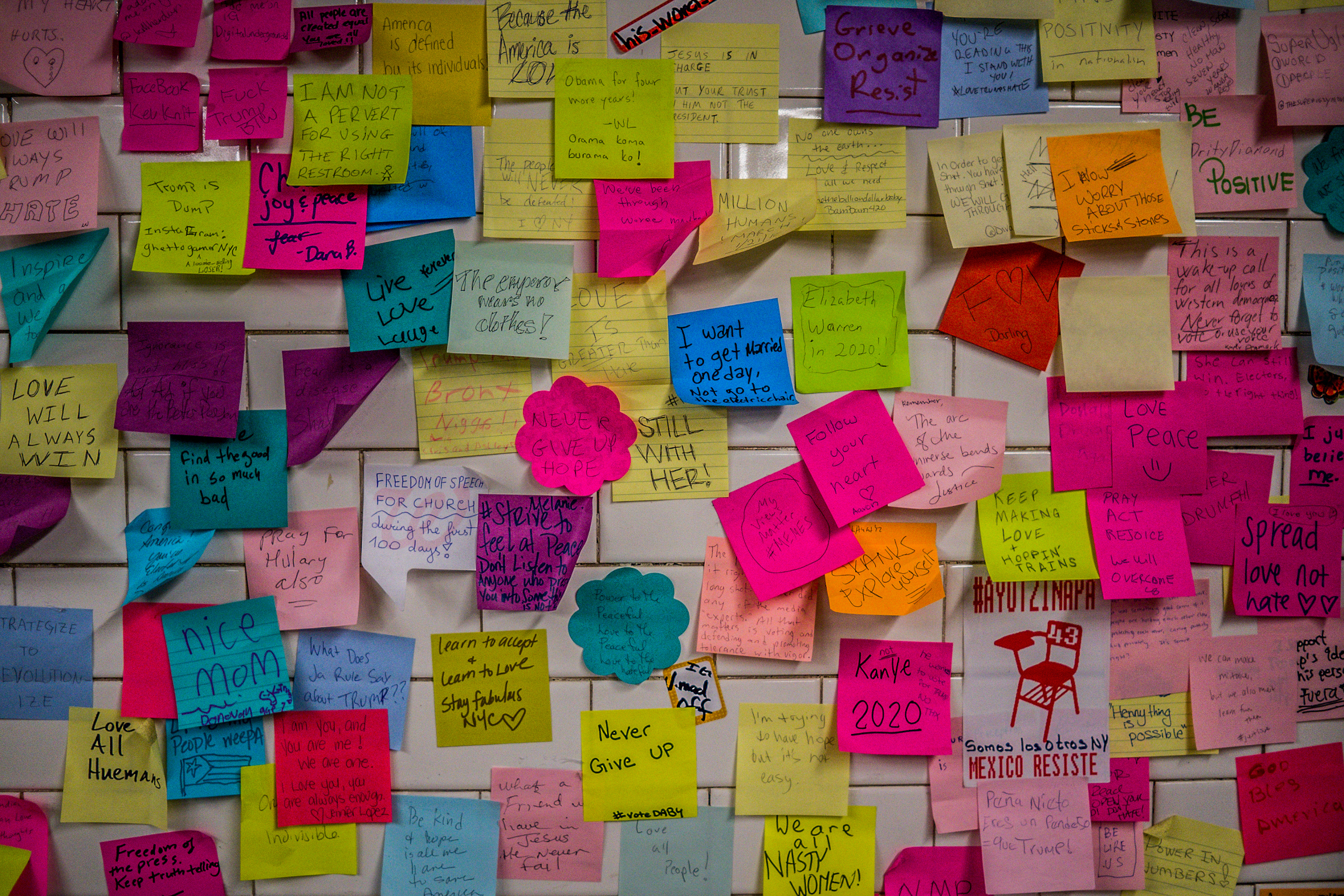 The Liefery IT Team had many new joiners over the last few months. As somebody new joining the team, it is a special opportunity to reflect on why and how things are done, still having a fresh and external view on the processes.

The retrospective (aka retro) was one of our meeting formats which experienced transformation and still leads to discussion. How we organized our retro meeting in the past can be read in an older blog post.

A retrospective is a method to support continuous development with a perspective on the people, interactions and processes. It is a people-first meeting, giving space to the value of the agile manifesto “Individuals and interactions over processes and tools”. It’s usually the only meeting with no laptop and something haptic like sticky notes, paper and scissor or similar. I have quite a vivid memory of the very first retro I ever joined. I liked the vibe it brought to be human and to interact on a different level with my team-mates.

Esther Derby and Diana Larsen shared the 5 steps of a retrospective about which Claus Vagner Pedersen blogged on medium: 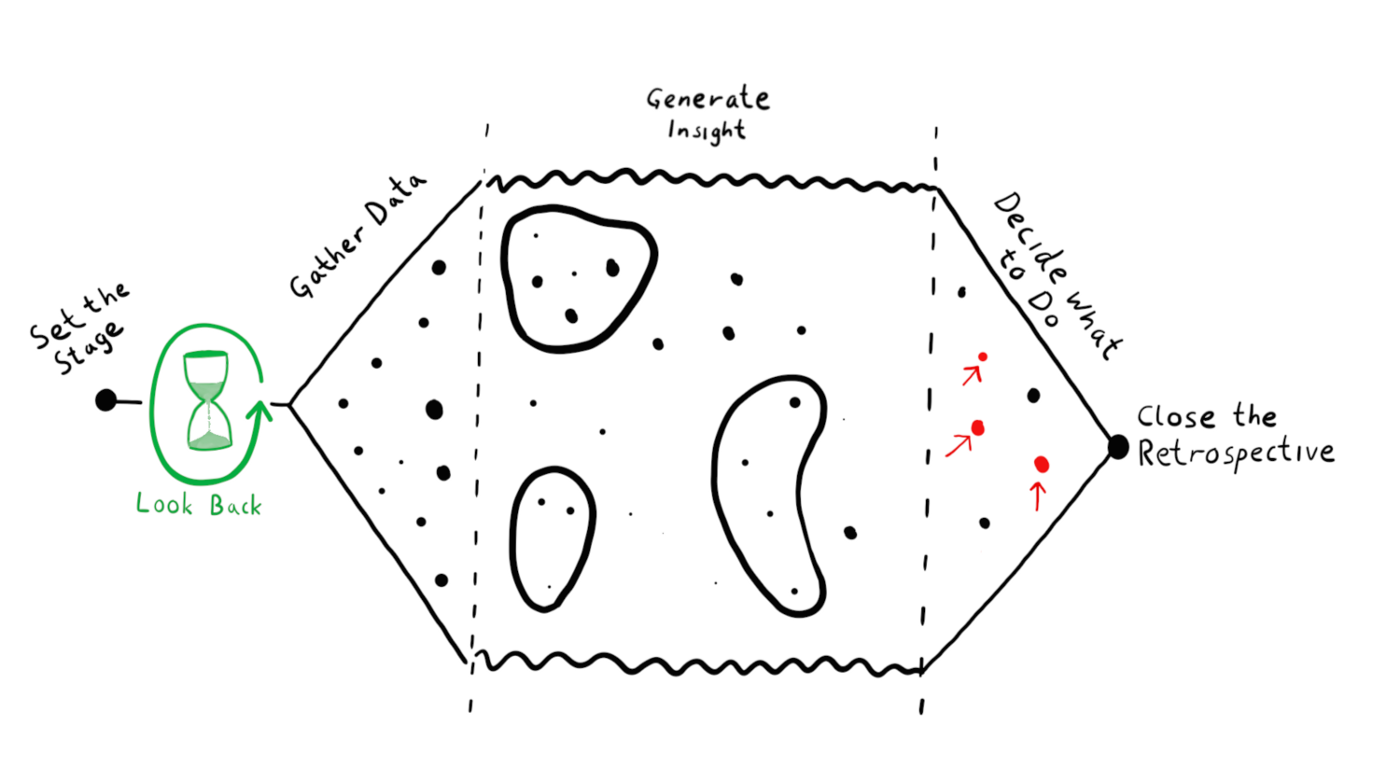 When I joined Liefery I was curious about how the retro was done since we have a remote-first approach, about which we wrote in our blog before. In the retro one of the team members volunteered to take notes and then everybody one-by-one talked about their likes and wishes. Afterwards we went through all the wishes and made action items for them.

I felt that a lot of time passed by the person taking notes to catch up and missed the slot in the meeting where everybody brain-dumps (usually on sticky-notes) everything related to the questions given. With

Our old process meant that the people either had to prepare themselves before-hand (which would make the note-taking redundant) or just answer the questions out the top of their head, which in my perspective makes a big difference of what the people will share. To me it seems exactly like the pitfall Claus Vagner Pedersen is talking about in his article “The Retrospective: A known recipe for improvement — with my own spice”, mentioning that teams often go already into solution mode and miss the point to just gather data. For gathering data it is a common method to support the people in brain-dumping everything, what gathers as thoughts in the brain, on paper by giving a short time frame, which helps to not judge or question the thoughts before writing them down.

In our case the wishes were often either not action-able (e.g. “I person x would not be leaving the team”) or were just 1:1 taken as an action-item.

Since our culture consists of very flat hierarchies and we live the agile mindset of trial and error, change can very easily be implemented. The already implemented retro gave space to share my perspective on the situation and the team was up for an experiment. This process already started a few weeks after I joined the team - for which I want to give the team a huge credit. I think it is not common that a team welcomes or at least accepts criticism, followed up by transformation, of a very liked and regular meeting by somebody who just joined.

After the recommendation of my agile coach mentor by MentorMe, which is a non-profit organization for women about mentoring and training (which you check out and should support with your mentoring!), I introduced retrotool to facilitate online retrospective meetings.

The retrotool is a great way to integrate the features of an offline retrospective with sticky notes. Each person can prepare their own sticky notes which will be color-coded and saved to a private section by the tool automatically. There is even an integrated 5 minute timer which can be used for the time-boxing. When it is your turn you can drag & drop one card after the other in the public section of the board. 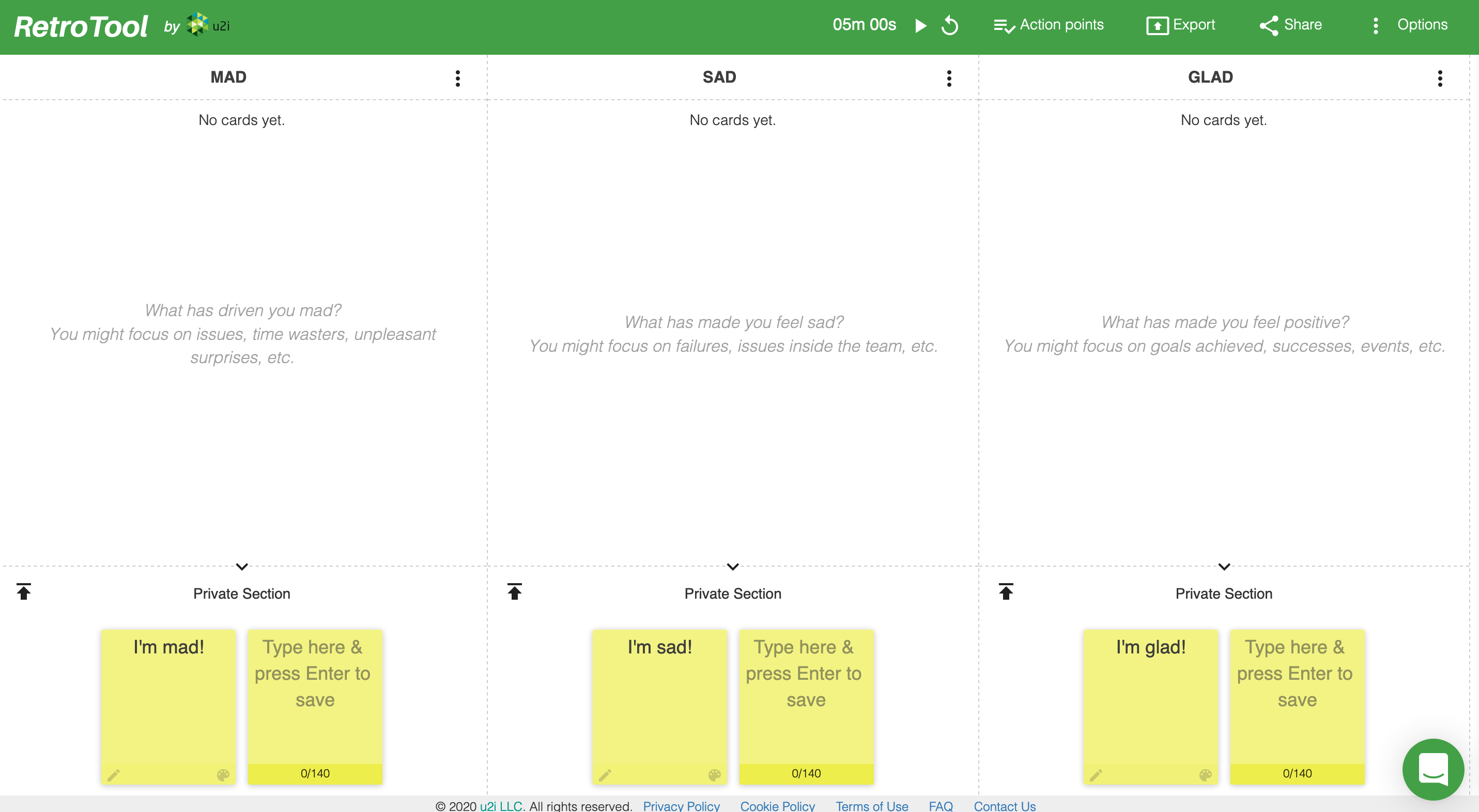 After everybody shared their notes, it is possible to activate hidden voting, so that there can be a non-biased voting. We decided that everybody can give 3 votes in total. To see what wins the majority, we sort each board-section with the built-in retrotool option by points and start with the most votes and proceed in descending order. Compared to the old process I think the voting is also a huge win to have a better insight of what matters to the team and not only representing concerns for individuals.

The action items can also immediately be noted in the tool. A big advantage is also, that everything, despite the votes, can be exported. This is very handy for documentation and is a much better balanced use of resources than before. ___

The very first (new) retro we had with the columns GLAD / SAD / MAD which lead to a discussion about giving too much space to negative feelings and being afraid of creating a blame-culture. The columns of the second (new) retro were GLAD / SAD / AFRAID which also didn’t satisfy the team since it felt to little action-able. Currently we stick to the already used columns from the past GLAD & WISHES, which I don’t think is ideal and lead to further discussions. Why I still think it’s good enough for now I described in the next chapter of improvement possibilities.

Since we were in the experiment of changing the process, it was important to gather feedback via slack and in a document. We also quickly and, especially when we were in the times of adapting a lot, regularly updated the documentation of our retro process true to the motto “safe enough to try, good enough for now”. This is also super helpful in trying to get more people involved in the faciliation of the meeting.

After at the beginning asking for volunteers, we now have a set rule of rotation for facilitating the retro. That person will set up the tool, share it before-hand and invite everybody to write down their notes. We do not have a designated time-slot in the meeting to write the notes. I’m not in favor of it, since, as mentioned above, the pressure of time, has an important function when brain-dumping as well as I think the chances increase to get a lower quality and quantity of insight.

In our case, as we merge so many different meetings into one (company news, retro, demo, planning) I see the issue and the fear of having another designated time-slot (writing the notes) in the meeting. I still think that the people more likely prepare with notes now than with the old process, since before they just shared it vocally but now they actually drag their notes to the virtual board for everyone from the team to see.

Even though we made great transformations and improvements, there are still things which are not ideal. It works for us right now, but as a learning and improvement opportunity for the readers I also want to transparently share the concerns I have.

For every meeting the tone of starting is very important, I think especially when it comes to a retro which is often much different than the other meetings were you talk about the hard facts. If you have a designated Scrum Master or Agile Coach it might be very likely that some kind of ice breaker activity will be scheduled for the beginning to set a positive tone for the meeting.

In our case our retro-meeting always started with the company news which sets the stage for the meeting. Especially in times of corona those news can be regularly disappointing to the team (e.g. ongoing hiring freeze) and therefore it can be quite counter-productive. I think it is important to be aware of it.

We just recently solved this problem unconsciously because we introduced another method inspired by The Book “Software For Your Head - The Core Protocols” and the, by some team colleagues, shared concern that we are lacking a way to share feelings (because of our very actionable driven retro). This new method invites everybody of the meeting to share their current state of feelings based on the 4 core feelings: mad, sad, glad and afraid. The people can share as much as they want and they feel comfortable with. We will start the recording after this with the CTO sharing the company news. So we now set an much different, emotional and bonding stage for the meeting. Even if feelings, which from our culture are perceived as negative, are shared the quality in sharing authentic and true feelings will still create a positive and valuable stage for the rest of the meeting in my opinion.

Something else I miss compared to an offline retro is the possibility to cluster. It gives me the perception that we actually miss the stage of the already mentioned 5 steps of a retrospective by Esther Derby and Diana Larsen which is about generating insight. We are very limited to the notes which often result in the person who wrote the note, sharing the note and saying a few words about it and when we talk about the note, the person who shared, just shares the same thoughts again.

In the past I experienced (offline) retro’s where, after everybody shared their notes, a free-flow of clustering would take place. Without talking the people clustered the notes depending on their perception and it would be done when nobody would moves a note anymore. Together we gathered headlines representing the clusters and then we would talked about the clusters. I really enjoyed this way and I really miss this possibility when doing an online retro.

Another down-side is also that we are software engineers, having our main field of competence somewhere else than facilitating meetings and nourishing the agile culture using a variety of methods. In hosting our own meeting we probably have some blind-sport we are missing and the opportunity to grow might not be as big as when having a designated Scrum Master or Agile Coach.

We have our retro meeting each Tuesday and quite some people are off on Fridays. This means that several team members have a break of 3 days. I don’t think that this is ideal and that it might be more beneficially to schedule the retro to end of the week and before people are regularly off.

Last but not least I want to mention that when introducing changes to very implemented routines or rituals I think it is always important to have the context of world transformations or already happening team transformations in mind (e.g. corona, team transformation when many people leave and join the team, meeting transformations). In our case all those happened at the same time. The team was very open to experimenting, we made progress and still reflect on the processes. Due to the current situation though it might be better to not make any further changes, bring back some old rituals to hold on to, that’s why I wouldn’t push for more major changes at the moment, even if I still think there is room for improvement. Please have in mind that not too many things should change at once and when already the whole world changes due to a pandemic changing team processes should be done very mindfully.